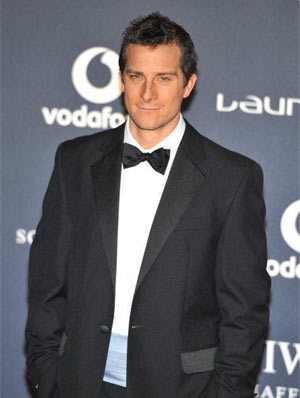 UNIVERSAL CITY, Calif. - October 8, 2012 --NBC has given the green light to "Get Out Alive" (working title), a new, larger-than-life and extreme adventure reality-competition series headlined by world-renowned adventurer Bear Grylls, to be co-produced by Bear Grylls Ventures and Ben Silverman's multimedia studio, Electus.

The move to NBC for "Get Out Alive" marks the first time the international television star will debut on network television. The show will test teams of two beyond their most extreme imaginations in the wild. NBC has ordered eight episodes of the series, with additional creative details to be revealed at a later date. "Get Out Alive" is set to air in primetime in Summer 2013.

"To meet Bear is to meet a force of nature," said Paul Telegdy, President, Alternative and Late Night Programming, NBC Entertainment. "He is a magnetic and charismatic talent, whose infectious enthusiasm for adventure inspires people to push themselves beyond their limits. These contestants are in for the ride of their lives!"

"'Get Out Alive' will be raw, tough and unrelenting, but it will also inspire and teach the essentials that one day may just save your life," said Grylls. "The goal is to empower people with the ultimate in both survival and teamwork, and that brings incredible reward... but first there must be some pain."

"Bear is the most exciting talent in the world of survival adventure today -- there is simply no one like him," said Chris Grant, CEO of Electus. "To be able to partner with Bear and the rest of his team is a dream come true. I believe that the synergies between our two companies are limitless and we are very excited to make programming with Bear for NBC."

Grylls' passion for the outdoors was forged during his childhood in the U.K on the Isle of Wight where his late father taught him to climb and sail. Trained from a young age in martial arts, Grylls went on to spend three years as a soldier in the British Special Forces, serving with 21 SAS. Despite a free-fall parachuting accident in Africa where he broke his back in three places, Grylls went on to become one of the youngest climbers ever to reach the summit of Mount Everest. Today, Grylls is perhaps best known for his international TV series "Man vs. Wild" (known as "Born Survivor" in the U.K.), which has achieved a global audience of over 1.2 billion followers and author of his #1 best-selling book "Mud, Sweat and Tears."

About NBC Entertainment
NBC Entertainment develops and schedules programming for the network's primetime, late-night, and daytime schedules. NBC's quality programs and balanced lineup have earned the network critical acclaim, numerous awards, and ratings success. NBC has earned more Emmy Awards than any network in television history. NBC's roster of popular scripted series includes the Emmy Award-winning comedies "The Office" and "30 Rock," as well as the critically acclaimed "Parks and Recreation" and "Community." NBC's drama slate is highlighted by the veteran, award-winning series "Law & Order: Special Victims Unit" and "Parenthood," along with the popular recent additions "Smash" and "Grimm." Unscripted series for NBC include the vocal competition hit "The Voice" as well as "The Biggest Loser," "The Celebrity Apprentice" and the perennial #1 most-watched summer series, "America's Got Talent."

About Electus
Electus is the first integrated multimedia entertainment studio to unite producers, creators, advertisers and distributors under one roof and produce all forms of content for distribution across a variety of platforms around the world. Headed by Ben Silverman in partnership with IAC [NASDAQ: IACI], the company connects advertisers, distributors and content creators early on in the development process, enabling marketers and advertisers to be a true partner in campaigns and content creation. Electus International, the global distribution arm or Electus, is responsible for all international sales and distribution for Electus' programming and its studio partners as well as programs and formats from other well-known 3rd party providers.