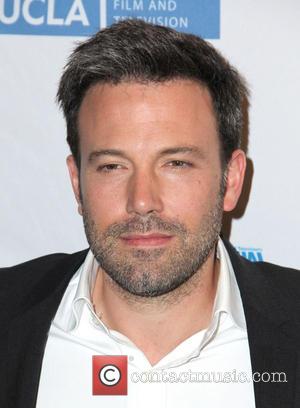 Ben Affleck took to the stage at the 25th annual Producers' Guild Awards and was complimented, not for his acting, but something else.

The 41 year-olds manhood become the talk amongst the crowd as he presented an award at the Beverly Hills hotel on Sunday night (Jan 19th).

It all began when television's famed producer, Chuck Lorre (Two and a Half Men, Big Bang Theory) was presented with the coveted Norman Lear Achievement Award in Television.

During his speech, Lorre informed the audience that he was stood next to Affleck in the urinals at last Sunday's Golden Globes and told them, "Yes I peeked. And yes, Comic Con, he can play Batman," (via E!News).

Later in the evening he drew attention to the 'Argo' actor's privates again, by referencing a "Ben Affleck chubby."

Affleck took to the stage, while the 'Batman' theme song played, a little while after to present the award for Best Picture.

And yes, he did take notice of Mr Lorre's earlier comments.

"I was at the bar briefly, and I came back to my seat and somebody said, 'You know, there was a guy up on stage who said you have a big d--k,'" the 'Armageddon' actor jokingly quipped. "I was like, 'You know, isn't that always how is goes? The one time it happens and I miss it!'"

"Thank you very much. Whoever you are, God bless you. I'm often confused with Matt Damon but rarely with Michael Fassbender, so..." he added, referring to Fassbender's large manhood that was featured in the 2011 film 'Shame'.

Joking aside, Affleck present the award to the producers of '12 Years A Slave' and 'Gravity' in a tie, making the Best Picture at the 2014 Oscars an unpredictable race.