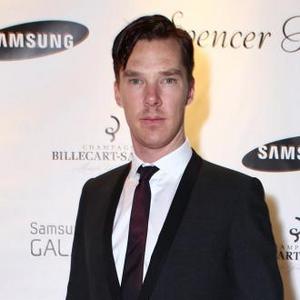 Benedict Cumberbatch thinks his rising fame will make it harder to find a girlfriend.

The British actor - who will portray villain Kahn in forthcoming 'Star Trek 2' and previously appeared in 'Tinker Tailor Soldier Spy and War Horse' - is currently single after splitting with girlfriend Anna Jones, who he dated following the demise of his 10-year relationship with Olivia Poulet but thinks his celebrity status will only make him more awkward in social situations.

He said: ''I'm not confident in social situations, just going up to someone in a bar is and saying 'hi' is going to be even more difficult because they won't know the real me.

''They will just know me as a fictional person I play on the screen.''

Benedict - who is best known for portraying fictional detective Sherlock Holmes in drama series 'Sherlock' - was ''terrified'' when he first arrived on set for 'Star Trek 2' but had an amazing experience and says his castmates, including Zachary Quinto and Tom Hardy - made him feel at ease.

He added in an interview with the Daily Mirror newspaper: ''I literally got off the plane and went straight to the studio. They were due to start shooting the film in five days and I walked into a room full of designers, artistic directors, Editors, directors of photography and about five producers. I was terrified.

''I was jet-lagged but it was an amazing. amazing experience working on the film.

''We did crazy hours but it was wonderful to work with people my own age, all sharing an experience. I was the Brit abroad but everybody was incredibly supportive and welcoming. I had a really good time and I think it's going to be a phenomenal film.''