Benedict Cumberbatch swore out of frustration after a series of constant interruptions during his performance in 'Hamlet' on Saturday (08.08.15). 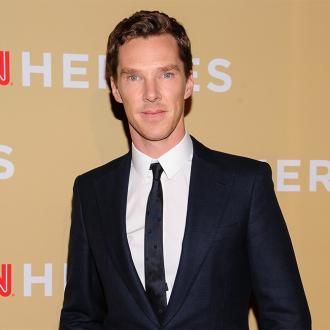 The 'Sherlock' actor stunned the audience at London's Barbican theatre when he swore after losing concentration when a carpet jammed in a door on stage.

However the star's patience was already tested midway through his recital of Shakespeare's infamous ''To be or not to be'' soliloquy - in which a dejected Prince Hamlet contemplates death and suicide - when an accompanying audio track failed and he was forced to restart the speech from the beginning.

After the performance, the 39-year-old actor felt compelled to vent his frustrations to fans outside the theatre, and also asked them to resist filming or taking pictures during the performances in future as he found it distracting.

He said: ''It's been a hell of a week -- one damn thing after another.

''The play's the thing. Not your mobile phone. I can see cameras, I can see red lights in the auditorium ... we started again tonight. I can see a red light in the third row on the right, it's mortifying.

''There's nothing less supportive for me to be on stage experiencing that, and I can't give you what I want to give you, which is a live performance you will remember.''

Benedict insisted he wasn't ''blaming'' fans, but wanted them to pass on the message to others planning to attend the production.

He added: ''This isn't me blaming you, this is me asking you to ripple it out there.''

The 'Imitation Game' actor had been looking forward to playing the part of Hamlet in Shakespeare's tragedy for a long time and always thought when he reached his late 30s he would be the right age to portray the famous character.