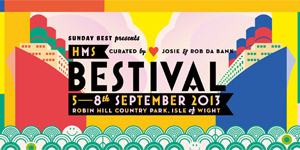 HMS Bestival is now boarding! That's right, preparations for our four day 10th Birthday spectacular are well underway and we have mega-exciting news as we can reveal our legendary Saturday and Sunday night headliners, Snoop Dogg and Elton John respectively!

In a UK festival exclusive and playing his first major festival set on home soil in many years, we're over the moon that Elton John and his band will be headlining Sunday night at Bestival! With Sunday night well and truly taken care of, we are beside ourselves with joy to announce that the Doggfather himself Snoop Dogg will be wowing the Bestival main stage crowd as our Saturday night headliner!

Following our Best Major Festival award win in 2012, our incredible 2013 tenth anniversary is not to be missed! From our opening night Bestival classics party, legendary acts, the most cutting edge new music, mind-blowing sideshows, cabaret and so much more, we're going the whole nine yards to deliver the greatest show on earth! So make sure you join us! Anticipation is really building for the tenth Bestival and tickets are flying, so make sure all you shipmates come aboard while you can!