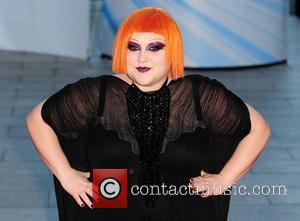 Beth Ditto refuses to allow her girlfriend to travel with her to Britain - because she wants to protect her from the U.K. press.
The Gossip frontwoman has been in a relationship with her partner, who is known only as Freddie, for eight years but never invites her on the road with the band.
Ditto is adamant Freddie stays out of the spotlight after witnessing first-hand the notoriously tough British media.
She says, "(It's) not because I don't think she can handle it, but because that's my life. Say what you want about me. Say it to my face, say it behind my back, write it on the f**king bathroom mirror, I don't care. But do not talk about the people I love. I will lose my mind. (British tabloid) The Daily Mirror went all the way to Arkansas to look my dad's number up. I was just furious!"