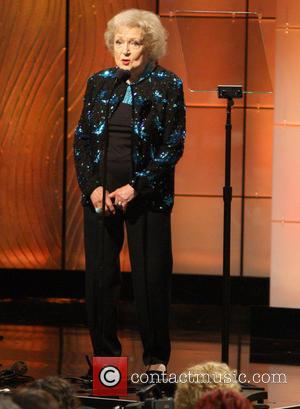 The former Golden Girls star is gearing up for the third season of her prank show, which features elderly actors, and to help promote its debut in 2014, White has recreated Cyrus' provocative scene in her latest video.

In the clip, White says, "I got some ideas from recent pop culture events that really got the kids talking."

She is then seen flying into the frame straddling a giant wrecking ball, almost identical to the former Disney star, however White dons an all white track suit instead of opting to go fully nude like Cyrus.

White then asks for a sledgehammer, but instead of licking it like the 20-year-old singer, White gently kisses it, before requesting a foam finger like the one Cyrus used in her racy MTV Video Music Awards performance with Robin Thicke.