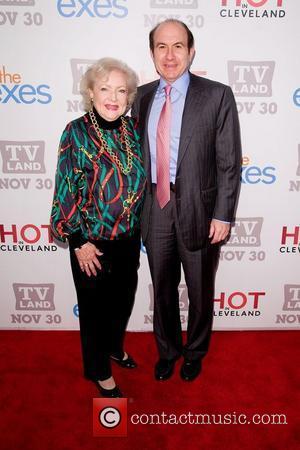 TV veteran Betty White has a big reason to celebrate on Tuesday (17Jan12) - America's favourite Golden Girl turns 90.
Known for her comedic chops and charming wit on U.S. hit shows like Hot in Cleveland, The Golden Girls and The Mary Tyler Moore Show, White boasts a successful career, which now spans seven decades.
And she doesn't appear to be slowing down with age - on Monday night (16Jan12) bosses at U.S. network NBC paid tribute to the legend's career by airing a star-studded TV special, which featured Hugh Jackman and Carol Burnett, among others, paying tribute to the birthday girl - and she is just about to premiere a new senior citizen hidden camera show, titled Off Their Rockers.
Because the funnywoman has already celebrated her birthday with her best celebrity pals, White tells WENN she plans on spending the day working on crossword puzzles and hanging out with her longtime companion - a Golden Retriever named Pontiac.
And in honour of the spunky star's landmark birthday, we've compiled 10 fascinating facts about the beloved actress to mark the occasion. Happy Birthday, Betty White!
- The actress was born in Illinois during America's Great Depression but her parents moved the family to Los Angeles when she was just two years old.
- She attended the Horace Mann School in Beverly Hills, California - the same middle school as Angelina Jolie, Nicolas Cage and Lenny Kravitz.
- Unlike a number of celebrities, the actress never changed her name before entering the entertainment industry. She was born Betty - not Elizabeth - because her parents didn't want her to be bogged down by nick names.
- White has been married three times - briefly to Army Air Corps pilot DICk Barker in 1945, Hollywood agent Lane Bryant from 1947 to 1949 and TV host Allen Ludden, from 1963 until his death in 1981.
- She has won a total of seven Emmy Awards throughout the course of her career - her first was a 1975 Best Actress honour for her work on The Mary Tyler Moore Show, and her most recent was in 2010, for Outstanding Guest Actress on A Comedy Series for her hosting turn on U.S. sketch show Saturday Night Live.
- White has been a life-long animal advocate. She received the American Veterinary Medical Association's Humane Award in 1987 for her charitable work, and the Los Angeles Zoo recognised the comedian with a bronze plaque near the Gorilla Exhibit in 2006, when she was officially named the tourist attraction's Ambassador to the Animals.
- She turned down the chance to play Helen Hunt's mum in the 1997 film As Good As It Gets because she objected to a scene in which Jack Nicholson's character pushes a dog down a trash chute.
- She has already cemented her place in television and movie history - White was inducted into the Television Hall of Fame in 1995 and she was honoured with a star on the Hollywood Walk of Fame next to her late husband Ludden's in 1998.
- White is the last surviving member of the cast of hit TV show The Golden Girls, which premiered in America in 1985. Estelle Getty died in 2008, Bea Arthur passed away in 2009, and Rue MCClanahan followed in 2010. Industry insiders feared White might succumb last year (11) after a mysterious annual pattern of co-star deaths was discovered.
- She is also a highly-successful author - White has written a total of six books. Her last one, If you Ask Me (And Of Course You Won't), is currently a New York Times Bestseller.