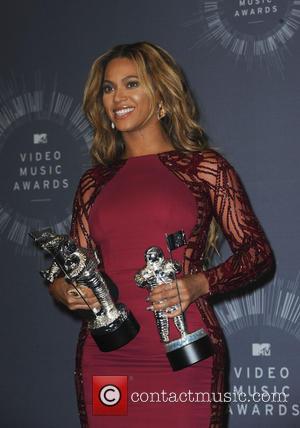 One of U.S. Tv network Bet's top executives has reached out to apologise to Beyonce and Jay Z after their young daughter became a butt of a terrible joke on Monday (25Aug14).

Chris Brown's model girlfriend was asked to read from a script of jokes speculating what Blue Ivy was thinking while she watched her mother perform onstage, and when she said, "'I really did wake up like this because my parents never combed my hair", Tran immediately knew she had gone too far, adding, "Sorry, Blue! I love you!"

That apology didn't appease Beyonce fans who took to social media to attack the model, prompting Tran to tweet, "Now y'all know I Love me some Beyonce and Blue Ivy! I didn't write this script y'all lol (laugh out loud)."

The backlash finally prompted Stephen G. Hill, the president of music programming and specials for Bet Networks, to apologise on behalf of his company.

In a series of tweets on Tuesday (26Aug14), he wrote, "Last night on 106 & Park there was a stupid, unthoughtful (sic) joke made about a young child... We apologize publically (sic) to the child’s parents (and have done so privately) and we have taken punitive actions with those responsible."

He added, "It was very bad judgment and we will serve you much better in the future. And please don’t hate on Karrueche; it was Not her fault. We also apologize to her for putting her in that position."