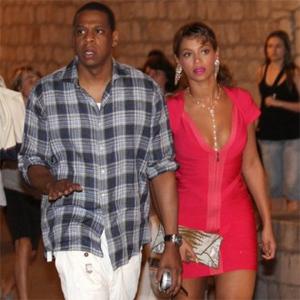 The singer - who announced at last month's MTV Video Music Awards she is pregnant - sported a radiant maxi patterned dress as she enjoyed a romantic dinner date with the rapper in Venice, while the father to be was dressed down in jeans and a white shirt.

The Celebration comes shortly after the 'Single Ladies (Put A Ring On It)' hitmaker announced she was expecting a baby, telling the audience at the Nokia Theatre in Los Angeles she had a "surprise".

Since the revelation, the brunette beauty - who married the hip-hop star in 2008 - has reportedly been inundated with gifts from stars such as Rihanna, Oprah Winfrey and Beyonce's former Destiny's Child bandmates Kelly Rowland and Michelle Williams.