Beyonce held a launch party for her self-titled fifth album at an arcade in New York last night (19.12.13). 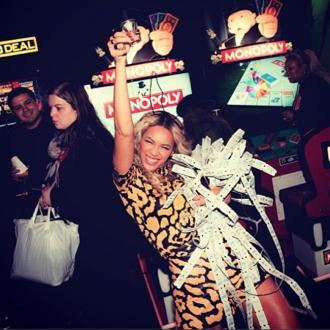 The 'Drunk in Love' singer celebrated her self-titled new album's success - after it topped the US charts and sold over 500,000 copies in its first week of release despite no prior promotion - by partying at Dave & Buster's arcade in New York, following her concert at the Barclays Center in Brooklyn earlier in the night.

Guests played arcade games, enjoyed drinks from own Beyonce cups, and were also able to snack on Beyonce themed cupcakes.

Among those at the event were stylist Ty Hunter, designer Alexander Wang songwriter J. Cole and rapper Drake, who features on the track 'Mine' from the new album.

Drake addressed the crowd during the celebrations, saying: ''I just came out tonight to let you know congratulations to each and every one of you that worked on this s**t, for real. And of course to the queen, the utmost congratulations.''

Explaining why she chose to release her record - which comes with accompanying videos for all of its tracks - as a surprise, Beyonce said she was ''bored'' with the traditional way people put out their music.

She said: ''I didn't want to release my music the way I've done it. I am bored with that. I feel like I'm able to speak directly to my fans. There's so much that gets between the music, the artist and the fans. I felt like I didn't want anybody to give that message when my record is coming out. I just want this to come out when it's ready from me to my fans.''