Beyonce opened her The Mrs. Carter Show World Tour in in Belgrade, Serbia on Modnay (04.16.13), serenading fans with some of her biggest tracks and wearing a series of show-stopping outfits. 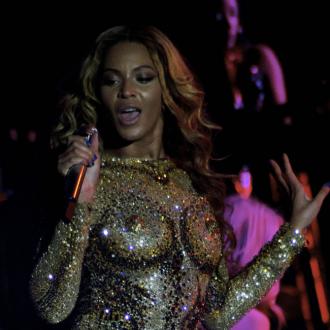 Beyonce kicked off her The Mrs. Carter Show World Tour in Belgrade, Serbia.

The superstar performed her biggest hits on Monday's (15.04.13) opening night of the tour, performing an impressive set of over 20 songs.

The former Destiny's Child diva kept fans happy with old favourites including 'Single Ladies (Put a Ring on It)'', 'Love On Top', 'Crazy In Love' and 'Halo', as well as a cover of 'I Will Always Love You', made famous by Whitney Houston. However, she did not preview any new tracks from her forthcoming fifth studio album.

However, Beyonce caused the biggest stir with one of her more daring get-ups - a sequinned bodysuit with fake chest enhancements which left little to the imagination.

She also kept dark blue nail varnish on throughout, in tribute to her daughter Blue Ivy Carter, with rapper husband Jay-Z.

The 31-year-old singer is next jetting off to Croatia , followed by Slovakia, the Netherlands and France before arriving in the UK and Ireland later this month.

She will then head over to the US for the North American leg of her tour in June, with a month's break in between her last European date in Stockholm, Sweden, on May 29.

'Single Ladies (Put a Ring on It)'

'I Will Always Love You'