Beyonce Knowles is said to have arranged for her and Jay Z's daughter Blue Ivy to have a play date with Duchess Catherine and Prince William's son Prince George. 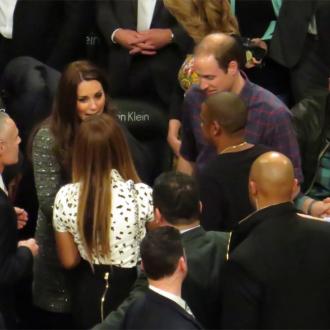 Beyonce Knowles has arranged a play date for her daughter with Prince George in the new year.

The 32-year-old singer and her husband Jay Z met Duchess Catherine and Prince William at the Barclays Center in Brooklyn while watching a basketball game on Monday (08.12.14), and Beyonce is said to have bonded with the brunette royal about their children and arranged for Blue Ivy, two, to meet the 16-month-old prince.

A source said: ''Bey was in awe of Kate and William and they found common ground talking about their babies. Now they've pledged to introduce Blue Ivy to Prince George when they come to England in the new year.

''They've already made a play date at George's nursery.''

As well as enjoying the basketball game between the Cleveland Cavaliers and Brooklyn Nets as part of her and William's three-day trip to New York, Catherine - who is pregnant with the couple's second child - also chatted to Beyonce about their Christmas present ideas for Blue and George.

The source told the Daily Star newspaper: ''They were also discussing Christmas presents and how they didn't want to spoil their children.

''They agreed something small that their children can take to bed and cuddle is always a winner.''

Another onlooker recently admitted it was like a ''mob scene'' around the two couples when they met at the match.

They explained: ''Bey and Jay got up out of their seats during the break before the fourth quarter and walked across the court to say hi.

''Everyone was standing up and gawking. It's a mob scene around them.''