Beyonce's fans are a little too crazy in love. 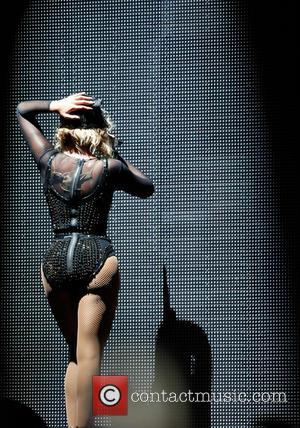 Being within inches of other human beings is becoming increasingly dangerous for Beyonce, especially when she’s plying her trade. Her latest incident occurred in Brazil, where a crazy fan decided a bear hug-drag movement was the best course of action.

Bey was in the middle of belting out another rendition of Irreplaceable when the fan tried to replace her with… nothing. They just went in, grabbed her and pulled her inward. Beyonce was subsequently rescued by a couple of burley security guards who didn’t take kindly to the incident.

Ever the professional, Beyonce – fully glad in an all-blue sparkling one-piece – shrugged it all off and finished her song. She then reassured everyone, telling them “It’s all right,” before actually asking the fan’s name, and telling them she loved them. (Mirror)

She had quite a different response when someone slapped her famous behind in Copenhagen. After doing the usual routine of high-fives and hugs, one reveller thought it would be a good idea to plant his hand on her bum. “I will have you escorted out right now, alright?” she said.

Another - albeit less traumatising - experience for Bey was when she inadvertently pointed the mic towards Joe McElderry. The former X-Factor winner busted out some notes leading the star of the show to take a step back: “You can really sing,” she declared.

The 32-year-old is currently on the South American leg of her Mrs Carter Show world tour. She and her husband – rap mogul Jay Z – recently performed a special live version of 'Crazy in Love' for LeBron James at his wedding. He was marrying Savannah Brinson, his high school sweetheart.