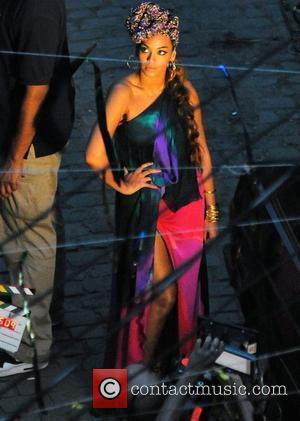 Producer ROB FUSARI was devastated when Beyonce took credit for composing BOOTYLICIOUS, alleging it was his idea to use a Stevie Nicks' riff in the DESTINY'S CHILD hit.
Fusari insists it was a "bittersweet" experience working with the R&B trio on the 2001 track - the catchy song went on to top the charts but Beyonce's dad and manager Mathew allegedly forced him to compromise his ideas for the project.
And he was further offended after the frontwoman claimed she was responsible for sampling Nicks' 1981 guitar part.
Fusari tells Billboard magazine, "I came up with the idea to build a track using the guitar riff from Stevie Nicks' Edge of Seventeen.
"I figured I'd put the guitar loop on there temporarily, and later go into the studio with a guitar and replay it, because I'd learned, after sampling Stevie Wonder's I Wish for Will Smith's Wild Wild West, that I didn't want to lose 50 per cent of the publishing (royalties). I vividly remember telling Mathew Knowles, 'Mathew, you got to book me into your studio and let me replay that riff.'
"He didn't want to do it. So 50 per cent got cut for one note. That whole experience was bittersweet for me.
"I remember watching Barbara Walters interview Beyonce about Bootylicious, and she told Barbara about how she came up with the idea for the track."
Fusari, who went on to help Lady Gaga launch her pop career, insists he was brushed off when he complained about the interview, adding, "I called Mathew - which was a big mistake; I got emotional, and I apologised after - but I called Mathew and said, 'Mathew, like, why?' He explained to me, in a nice way, he said, 'People don't want to hear about Rob Fusari, producer from Livingston, N.J. No offence, but that's not what sells records. What sells records is people believing that the artist is everything.' And I'm like, 'Yeah, I know, Mathew. I understand the game. But come on, I'm trying too. I'm a squirrel trying to get a nut, too.'"