Biffy Clyro Turned Down Chance To Write For Leona Lewis 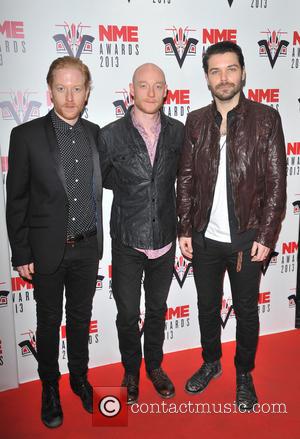 Frontman Simon Neil reveals the trio, which picked up the Best British Group trophy at Wednesday's (27Feb13) NME Awards in London, were approached to help pen hits for the Bleeding Love singer, but the bandmates turned down the opportunity because they couldn't bear the thought of giving away good tunes.

He tells Britain's Daily Star, "Writing for others is something I'd love to do once we slow down as a band. But if you write a song that you think is one of the best ever, and it's not for our band, I don't know if I'd be happy giving it away.

"We got asked to have a writing session with Leona Lewis and play on Robbie Williams' record... I'm a wee (little) bit selfish about it, plus we've got enough side projects, so we've got other outlets. It's a beautiful thing to sit and write songs all day."

Neil previously admitted he had to turn down an offer to play guitar on Williams' latest album Take the Crown as a result of prior commitments. Rocker Slash was drafted in to work on the unnamed track, but the collaboration had to be scrapped due to scheduling difficulties.