Posted in Press Releases on 20 November 2012 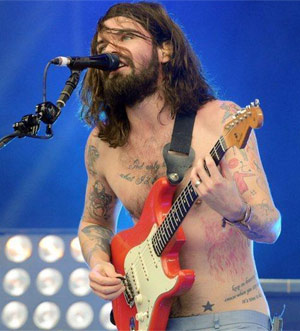 After over 600,000 UK sales of their Mercury Prize nominated album 'Only Revolutions' which featured a succession of hit singles, Biffy Clyro preview their eagerly anticipated new album 'Opposites' with the release of the single 'Black Chandelier' on January 14th on 14th Floor Records.

Produced by GGGarth Richardson in Los Angeles, 'Black Chandelier' will be available on iTunes digital EP and 7" formats. The digital format features two new songs from the sessions for 'Opposites' which won't feature on the album in the shape of 'The Rain' and 'Thundermonster', and will be completed by a live version of 'Many of Horror' which was recorded at this summer's triumphant headline show at RockNess. The 7" is backed with another new non-album track 'Milky'. The digital EP is currently available to pre-order from iTunes.

Excitement continues to build around the return of Biffy Clyro this week with two key events. Tonight will see the exclusive first play of 'Black Chandelier' on Zane Lowe's Radio 1 show, while the band will also perform on the next episode of 'Later. with Jools Holland' which will be televised live on Tuesday, November 20th and will be repeated on Friday, November 23rd.

Set to be released on January 28th, 'Opposites' signals the band's growing ambition with twenty-two tracks spread across two discs:  'The Sand at the Core of Our Bones' and 'The Land at the End of Our Toes'. A deluxe version of 'Opposites' adds a DVD which contains a feature-length documentary which examines the making of the album. Fans who pre-order the album will receive a taster of what's to come when they receive 'Stingin' Belle' as an instant gratification track.

Biffy Clyro's touring in support of 'Only Revolutions'  saw them elevated to arena and festival headlining status as they played three sold-out UK tours which included a landmark show at Wembley Arena. Their status as one of Britain's most exciting bands was reflected with Best Live Band awards from both NME and Q in 2011.

Recent weeks have seen the band unveil Storm Thorgerson's artwork to 'Opposites' with the help of Twitter, and they also played a special double-bill of sessions for Radio 1 by playing Fearne Cotton's Live Lounge in the morning before hitting Zane Lowe's Radio 1 Rocks later that same day.

This summer saw Biffy Clyro blast back into the live arena for festival dates at Rockness, iTunes, Download and the Isle of Wight. Now embarking upon an intimate European club tour which will be followed by dates in New York and Los Angeles, Biffy Clyro's touring in support of 'Opposites' commences in March with their biggest arena tour to date: