When it comes to suicide, no tragedy has an order of magnitude greater than any other: Stuart Adamson's body was found in a Hawaiian hotel room in late 2001 and a family lost a father, son and husband, whilst the world lost a man it treasured more than he seemed to believe. 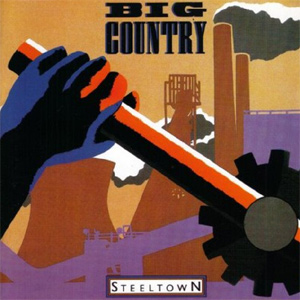 Raised in Scotland, Adamson had found stardom in the late 1970s via the punky - but never really punk - outfit The Skids before going on to form the more inclusive Big Country in 1982. At first it seemed like an inspired choice. Fuelled by the rise of stadium rock in Britain and a wave of fascination with Celtic tinged ephemera, they sparred with U2 and Simple Minds for the nation's affection, and début album 'The Crossing' went on to sell more than two million copies worldwide.

All was not what it seemed, however. Adamson was never truly at ease with pop stardom and   'Steeltown' was bleaker and more politicised - at least obliquely - drawing its inspiration partially from the crass solipsism of Thatcherite culture. Leaving behind the e-bow effects which had become (much to the band's chagrin) their hallmark, Adamson and counter guitarist Bruce Watson instead added density and some notably harder edges, with go-to producer Steve Lillywhite playing it simple by largely eschewing the studio trickery of the day. The result was a record as honest as its predecessor, but far more complex, full of villains and victims but short on heroes.

Not all of these qualities are conducive in pop music circles, and the laddish, here-we-go crowd struggled with songs like 'Flame of The West', supposedly about the aggression and greed of  the Reagan administration. There was frustration and bitterness too at the destruction of his adopted country's industrial heartbeat, the album's title track a condemnation of the closure of the foundries in Corby, the town which Scottish emigrees had fled looking for work.

Gone was much of 'The Crossing''s mysticism. On 'Where The Rose Is Sown' war itself was the subject matter or, more accurately, the blood-lust which demands bodies to fulfil it. Grimly defiant, when Adamson sang "Sons of men who stand like gods, we give life to feed the cause, we run to ground our heathen foe, our name will never die, this time will be forever" he was articulating equally the same sense of loss felt by those tossed on the scrap heap by progress.

Loss haunted every corner; on the achingly sad 'Come Back To Me', the subject was left carrying a child its father would never see, a grim ceilidh held for a woman who would never be consoled by telegrams full of insincerity. Predictably, 'Steeltown' wouldn't repeat the platinum sales of 'The Crossing'; both its successors 'The Seer' and 'Peace In Our Time' sold well at home, but the band's popularity in America - where Adamson would relocate fatefully to in 1996 - was never rekindled.

Part of a series of re-issues which began in 2012 with a deluxe version of 'The Crossing' followed by a four disc collection of work on 'Live At The BBC', the physical version of this release features two CDs, the original album on one, with the second stuffed full of remixes, out-takes and alternate versions.

As ever with these exercises, much of what the listener makes of the additional material will depend on the degree of their fandom. You'd assume most die-hards would have the B-sides one way or another, although 'Winter Sky' and 'Belief In The Small Man' are worth hearing again. Fill-in single 'Wonderland' (released between 'Steeltown' and 'The Crossing') also features, sounding much more like a throwback to 'The Crossing', the three versions of it, however, bordering on overkill. Much of the rest is for strictly for completists.

The landscape has changed beyond recognition in the 30 years since 'Steeltown''s original release,  the process of de-industrialisation completed and the previous Cold War now swapped for another one. What makes it remain contemporary is Stuart Adamson's songs, full of the scarred, beaten but not forgotten, people his celebrity status was supposedly meant to insulate him from. Still overflowing with restless energy after three decades, it's a fitting tribute to a man whose sweetness and bite were never anything less than human.