Rapper Big Sean Headed Back To His Old High School In Detroit, Michigan On Monday (08jun15) To Open A Brand New Recording Studio Named In His Honour. 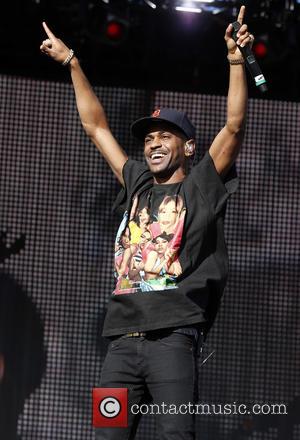 Picture: Big Sean - A variety of artists were photographed as they performed live on the second day of the second week at Rock In Rio...

The Dance hitmaker, real name Sean Anderson, had previously promised to build the students at his alma mater, Cass Technical High School, their very own studio if they achieved high scores on their end of year exams.

They did as he asked and Big Sean made good on the vow by teaming up with bosses at sports giant Adidas Originals to create the space with his charity organisation, the Sean Anderson Foundation, which supports disadvantaged youths.

He unveiled the Sean Anderson Studio of Infinite Possibilities during a return visit on Monday and shared an image of himself unveiling the building on his Instagram.com blog on Tuesday (09Jun15).

He captioned the snap, "I can't believe I used to rap at the lunch tables, slang (sell) my CD's in the hallways, and fast forward less than 10 years later I'm opening up my own recording studio at my old High School Cass Tech for the students! This brings me tears of Joy! Thank u (sic) for making this happen."

Pupils will be able to use the 784-square foot (72.8 square metre) space as part of the school's music curriculum.