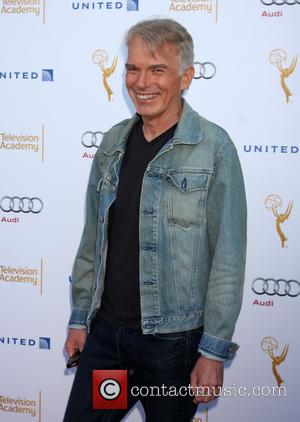 Billy Bob Thornton revisited his Angelina Jolie romance during a recent The Hollywood Reporter interview, recalling it was a wild and crazy time in his life full of ridiculous headlines and bizarre tales.

The Sling Blade star dated Jolie from 1995 to 2000, when the two stars began a three-year marriage, and admits so many of the stories printed about the couple at the time were very strange - including tales about a basement 'dungeon', which was actually a recording studio, and the vials of blood he and his wife wore around their necks.

Thornton says, "It was a crazy time, I've never been fond of it.

"The vial of blood (story) is very simple. You know those lockets you buy that are clear and you put a picture of your granny in and wear it around your neck? She (Jolie) bought two of those.

"We were apart a lot because she's off making Tomb Raider and I'm making Monster's Ball (and) she thought it would be interesting and romantic if we took a little razor blade and sliced our fingers, smeared a little blood on these lockets and you wear it around your neck just like you wear your son or daughter's baby hair in one. Same thing.

"From that, we were wearing quart jars of blood around our necks. And we were vampires and we lived in a dungeon."