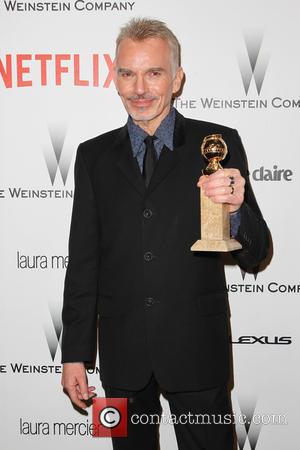 Actor Billy Bob Thornton asked his mother for permission to make a guest appearance on The Big Bang Theory because the sitcom is her favourite show.

The Oscar winner surprised fans of the Tv sitcom in October (14), when he made an unexpected cameo on an episode in the current eighth season, appearing as an awkward urologist with romantic feelings for Kaley Cuoco-Sweeting's character Penny.

Thornton admits he was turned on to the show by his mum Virginia, who watches the comedy every week, so he made sure to check with her before accepting the guest job from show creator Chuck Lorre.

Reuniting with The Big Bang Theory star Kunal Nayyar when the 33 year old guest hosted America's Late Late Show on Wednesday night (25Feb15), Thornton explained, "My mum watches it religiously, that's her favourite show, so when Chuck Lorre asked me, said, 'Hey, look, I know this is your mum's favourite show. If I wrote something insane, would you come and do a guest spot?' I said, 'Absolutely.'"

But Thornton confesses he was wracked with nerves as he made his sitcom return, following a stint in early 1990s show Hearts Afire.

He continued, "I was so nervous doing it because I haven't done that kind of show in, like, 20 years. I haven't been on a sitcom like that... I get to the set and it's like, 'Oh, the veteran film actor's here, everyone's gonna be nervous (around him)' and I was the one who was nervous! I kept asking... 'What are all these cameras? What do you do? Where do you stand?'"