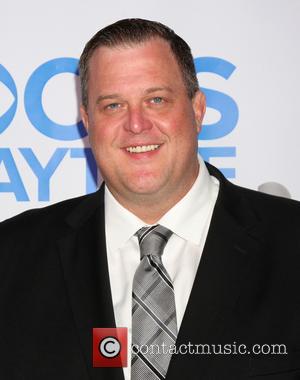 Picture: Billy Gardell - CBS After Dark - A Evening of Laughter benefiting stand up to cancer at The Comedy Store - West Hollywood, California, United...

Actor Billy Gardell suffered a setback in his battle to quit smoking for good on the set of Jersey Boys after director Clint Eastwood suggested his character should light up cigarettes.

The Mike & Molly comedian landed a small role in the upcoming movie adaptation of the hit musical, but he soon found himself returning to his old bad habit for the summer (13) shoot because he couldn't say no to the legendary screen star.

Gardell says, "I haven't smoked in about four months, five months, and I was using them (sic) electric cigarettes to get off (nicotine) and he goes, 'I think you should smoke in this scene, how do you feel about that?' (I said), 'Yeah, Mr. Eastwood, whatever you think!' He was just so cool, he's just such a guy."

Christopher Walken leads the cast in the movie, which chronicles the career of boy band Frankie Valli and the Four Seasons. The film also features Vincent Piazza and John Lloyd Young, who portrayed Valli in the Broadway stage musical that inspired the film.