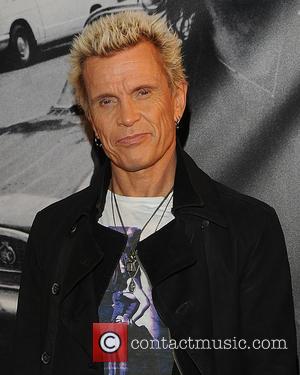 Rocker Billy Idol is showing off his charitable side and donating a portion of his earnings at an upcoming concert in Belgrade, Serbia to help the victims of devastating floods in the area.

The Balkan region has been hit with torrential rain over the past few days, causing flooding and landslides, and subsequently forcing thousands of residents to flee their homes, leaving a death toll of more than 40.

To help contribute to the relief efforts, the White Wedding hitmaker has announced that some of the money he receives from his upcoming appearance at the Belgrade Calling music festival on 25 June (14) will go towards those who have been affected by the floods.

He took to Twitter.com on Monday (19May14) to announce the news and wrote, "I'm playing in Serbia soon I will donate part of my earnings from that nights gig to a relief fund, hope that might help in some small way."

Idol kicks off his European summer tour on 7 June (14) in Sweden.

Russell Crowe is also spreading awareness about the floods, retweeting an aerial photo of the devastation and writing, "Catastrophic floods in Serbia! Please help!"