If you're the sort of person who puts genre tags on your mp3s, you must really hate Black Dice. Mr. Impossible, the Brooklyn-based experimentalists' sixth album, can't comfortably be filed under one catch-all term. IDM? No, this isn't music you can stroke your chin to. Noise? Well, there are noise elements here but it's most definitely not a noise album: there are some melodies scattered across it for a start. Indie? The band have influenced a bunch of indie groups, including Animal Collective, but you'd struggle to call an album of lurid synthesiser squiggles and drum loops indie. Pop? Keep dreaming. Just label them 'Black Dice'. 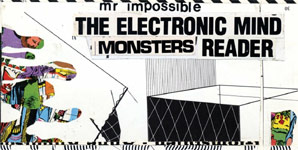 Mr. Impossible is an interesting record, partly because of this inherent oddness: it's an album which couldn't have been made by any other band and there's nothing else out there which sounds quite like it. At the same time, it's a difficult record to love. It's weird and confrontational, without having any hidden depths; it has a visceral kick to it, but you'll struggle to dance to anything here. Time and again, the band loop cheap-sounding beats (and they sound cheap for a reason: they were, according to the band, made using old, thrown-away equipment) and overlay bilious synth screeches, bloops and beeps. If Stockhausen had composed music for fairground carousels, it might sound a bit like this. The tracks shift uncomfortably: you'll be confronted with sudden sickly synth blurts, wordless vocals which are chopped and skewed and abrupt changes of direction.

At times, these weird ingredients almost add up to something accessible. The squelching, stomping 'Pigs' sounds like a distant cousin of a Battles track; like many of the latter's better songs, it lurches inexorably forwards, its momentum carrying it onwards as the electronics fizz and the beats crash down. Like much of Mr. Impossible, it's an extremely garish track, a track painted in ugly neon colours, unsubtle and brash. 'Shithouse Drifter' pops and skitters along, the beats shifting uneasily: it's almost, but not quite, danceable.

Black Dice have succeeded in creating something unlike any other album you'll hear this year and, for that reason alone, it's worth hearing once; whether you'll want to listen to it many more times after that is another matter. Too odd, disjointed and intentionally ugly to be an easy listen, and not subtle, challenging or fun enough to reward your full attention, Mr Impossible rather falls between two stools.