Review of The Beginning Album by Black Eyed Peas

You'll be familiar with 'The Time (Dirty Bit)', the ubiquitous chart-topper which opens The Black Eyed Peas' new album. It's an embarrassing mess of Auto-Tuned vocals, cringe-worthy rapping, and keyboard-demo beats. It unashamedly quotes from '(I've Had) The Time Of My Life', and makes the original sound like a work of art by comparison. It seems to have been composed by a six year old, and mixed by their pet dog. It's also the best track on The Beginning. 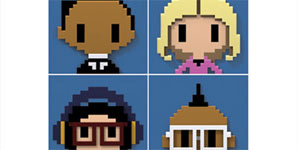 None of this should come as a surprise. The Black Eyed Peas are no strangers to critical brickbats; their last few albums have been mauled by the music press, and this one has provoked an even more hostile reaction. Despite this, of course, they continue to sell gazillions of records. It's tempting to indulge in some elitist posturing to explain this disconnect; to bemoan the lack of taste of those who keep spending money on their releases. 'Lack of taste' is a slippery, vague phrase, however. There is a more concrete way to explain the success of a group who, despite an apparent inability to sing, rap, write beats, or structure songs, remain a huge cash cow. They make deliberately blunt, uncomplicated communal party music, music which is best heard in a cheap, nasty club at two in the morning. In that situation, there's something almost compelling about their amateurish sing-along stupidity. If you see music primarily as something to soundtrack a drunken dance with friends, rather than as something to be enjoyed for its own sake, then there's something brutally effective about The Black Eyed Peas. They're the musical equivalent of very cheap supermarket own-brand vodka.

Unfortunately it didn't prove possible to review this album while drunkenly flailing around in a club, so it must stand or fall on what it sounds like when listened to alone and sober. In this situation, it sounds appalling; utterly, lamentably, irredeemably bad. Will.i.am's beats are childlike in their simplicity (4/4, anyone?) and shockingly dated. The lyrics consist of empty, clunky boasting. It's best not to even mention the synths. The grating 'Don't Stop The Party' (which comes complete with a 808s and Heartaches-despoiling autotuned chorus) would be a contender for worst song of the year, were it not for the existence of the even more wretched 'Love You Long Time' ('Boy I'll let you love me in the velvet lounge'). It's difficult not to conclude that even the music's effectiveness as a soundtrack to idiocy is entirely accidental; the band's benighted songwriting has somehow, purely by chance, turned out to have a use.

The oddest thing about The Black Eyed Peas is that they were once a conscious hip-hop band who drew on the likes of A Tribe Called Quest. Their subsequent grab for the lowest common denominator saw them effectively trade their musical credibility for commercial success. By now, you will surely know whether or not you enjoy their simplistic dance-pop; but even if you think they're a band who sound good on a night out, don't expect The Beginning to be something that can be appreciated for its own sake.