Tremors were a foot from the day that Black Rebel Motorcycle Club announced their tour of the UK. The thing that got peoples eyebrows raised is the fact that the band are selling out venues and shows have been moved to bigger venues to accommodate demand, for example, the band has had to upgrade to Barrowland's in Glasgow that meant only one thing, new album on the way. 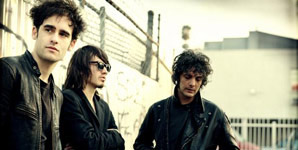 Black Rebel Motorcycle Club have had a torrid time to say the least but now they are back and look hungry, revitalised and ready to do what they do best, and not dwell on what has gone but look forward to what will be. For any BRMC fan this is an eagerly anticipated album and all eyes are cast on 'Beat The Devil's Tattoo' to see if it can actually deliver. The album starts with the title track which is somewhat of a rouse as this lures you into a false sense of security. The recognised BRMC sounds are there but toned and slowed down, it's still a good enough piece to keep you interested.

The band turn up all the amps and remind us of what they are capable of with rip roaring guitar chords - it's always hard to believe that there's only three of them making so much noise - 'Conscious Killer' appears to use all the pent up anger and rage that the band had inside and have managed to control it and turned it into a heavy quick fire rock tune. 'Bad Blood' carries on the theme and sets the standard which we will now expect for the rest of the album, especially with Peter Hayes vocals sounding unstoppable, The Black Rebel Motorcycle Club sound like they are on top form.

There is always a flip side though and 'Sweet Feeling' seems out of place and you might just find yourself skipping this track, but not to worry as this is just a minor blip and it's business as usual with 'Mama Taught Me Better' It's so good to hear Black Rebel Motorcycle Club playing their instruments with some anger and emotion again. Making music that matters to them rather than what is radio friendly.

Naturally the track that is over ten minutes long has got to be the standout track, but will it be for the right reasons or will it be a massive disappointment like Oasis 'All Around The World'? Well, 'Half State' is in fact 10 minutes 20 seconds long and the length isn't the only thing that stands out. It's as if BRMC have been going for the last twelve years for this moment. Every part of 'Half State' is what has made Black Rebel Motorcycle Club what they are today and it has to be heard to be believed. In short 'Half State' is epic.

The only real criticism that you can give is maybe they have overcooked it a bit with thirteen songs. Occasionally the album falls short, there are a couple of songs that don't fit on 'Beat The Devil's Tattoo' but would've been fine on say 'Howl'.

Black Rebel Motorcycle Club have gone though their back catalogue and captured the best parts of each album, transferring it onto 'Beat The Devil's Tattoo' and have made an excellent record. However the key thing to remember is that if nothing is shaking or heavily vibrating when you play this record, then you haven't cranked the sound up enough. This album should come with a 'Must be played stupidly loud' sticker on it.