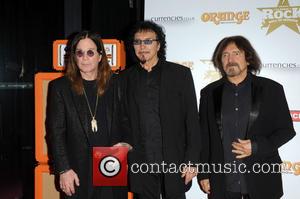 Reunited rockers Black Sabbath were triple winners at the Classic Rock Roll Of Honour awards in London on Thursday night (14Nov13), but terminally ill Wilko Johnson was the event's hero.

The 66-year-old former Dr. Feelgood guitarist, who was told by doctors that he would not live past October (13) after he was diagnosed with pancreatic cancer earlier this year (13), took to the stage to collect the night's Innovator Award and joked, "I'm supposed to be dead now."

The rocker, who hopes to have time to record one more album with The Who star Roger Daltrey, told the audience at the ceremony that he has never felt more "vividly alive" after accepting his latest award from fellow musician Jimmy Page at the London Roundhouse.

Meanwhile, Ozzy Osbourne and his bandmates collected the Living Legend Award and the Best Album prize for their comeback release 13. They also claimed the Event of the Year trophy for taking the album to number one on the British charts.

The triple win came hours after Osbourne, Tony Iommi and Geezer Butler announced plans to extend their reunion tour into 2014.

Event Of The Year - Black Sabbath go to number one

Album Of The Year - 13 by Black Sabbath

Film Of The Year - Celebration Day by Led Zeppelin

Band Of The Year - The Rolling Stones

The Showmen - The Darkness