Black Sabbath were named as the most inspirational band in rock at the Kerrang! Awards in London this evening (07.06.12). 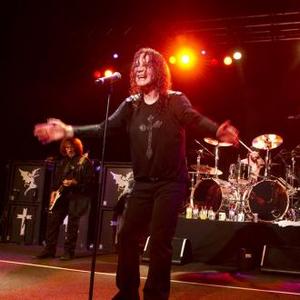 Black Sabbath were honoured for their influence on rock music at the Kerrang! Awards this evening (07.06.12).

The reformed band - made up of vocalist Ozzy Osbourne, guitarist Tomy Iommi and bass player Geezer Butler - picked up the Inspiration Award at the magazine's annual prize-giving show at The Brewery in Barbican, London.

Guitarist Slash was given the Icon Award, putting him in the company of icons including Marilyn Manson, Nine Inch Nails and Alice In Chains.

Surrey-based band You Me At Six won Best British Band for the second year running, beating Iron Maiden and Bullet For My Valentine to pick up the prize.

Other winners included Tenacious D for Service to Rock, Download Festival for Services to Metal and Enter Shikari, who were named Best Live Band.

Commenting on his award, Jack Black of Tenacious D admits he was surprised the magazine made up an award for him.

The magazine's editor James McMahon said: ''So that's another awards down, for another year, and I think, Justice was done in all the categories. Rock in 2012 has more than its fair share of heroes, pioneers, legends - and I'm chuffed a large proportion got to take home an oversized metallic K! for their mantelpiece this evening.''

Villain of the Year went to 'Boyfriend' singer Justin Bieber, who beat One Direction and Simon Cowell to win the prize.

Winner - While She Sleeps

Winner - You Me At Six

TWEETER OF THE YEAR

VILLAIN OF THE YEAR

HERO OF THE YEAR