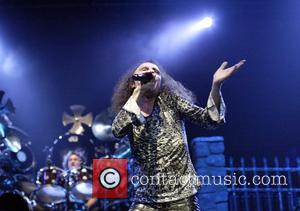 Black Sabbath star Geezer Butler, Tom Morello and actor Ewan McGregor are among the first wave of celebrities paying tribute to Deep Purple star Jon Lord, who passed away on Monday (16Jul12) after suffering a pulmonary embolism.
Morello and MCGregor offered their respects on Twitter.com, while Butler posted a tribute on his website.
Rage Against the MAChine star Morello writes, "Rip the great Jon Lord, Deep Purple's cornerstone/keyboardist. So many great great songs and that incredible Sound of his! Thankyou."
And fan MCGregor adds, "Jon played with my great friend Tony Ashton. They'll be jamming upstairs now!"
Meanwhile, Butler took to his blog and posted: "Very sad to hear of Jon's death, following his battle with the demon cancer. One of the great musicians of my generation. Tony Iommi recently worked with Jon, and said what a lovely bloke he was. I met him a few times, but never got to work with him. Blessings."
Lord was working on new material with Iommi, Iron Maiden's Nicko MCBrain and Ian Gillan at the time of his death.
Slash has also offered up his thoughts about Lord's death, tweeting, "Sad day in Rock & Roll; Jon Lord has passed on. One of the biggest, baddest, heaviest sounds in Heavy Metal. One (of) a kind. Rip."
Jon Lord was 71.