The Voice Finale Approaches And Blake Shelton Is Rooting For Country

The Voice coaches seem to be taking their jobs very personally, as contestants go head to head in this week's playoffs. 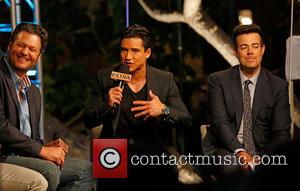 Picture: Blake Shelton, Mario Lopez and Carson Daly - The US coaches of the Voice at The Grove to appear on entertainment news show 'Extra' -...

Things are getting heated up over on The Voice as judges Shakira and Blake Shelton butt heads over who they want to send to the finale. The playoffs continued last Tuesday and, under Shelton’s coaching, it would be no surprise if the next Voice of America ended up being a country performer. The biggest hopeful for this season seems to be 16-year-old country songstress Danielle Bradbury, after she was named as one of the contestants to beat on this episode.

With her in the running, it might be that country is making a comeback to the talent competition. Shelton certainly knows it and he commented during last night’s performances: 'I've been saying since day one I want to bring a country music singer to the finale,' said Blake, who thinks this year he can do just that.

He does have some tough competition though, in the face of Shakira’s team, and one singer in particular: Sasha Alan. Despite Alan being a favorite for the top spot, her mentor was definitely experiencing a case of nerves before the performances began: 'I'm so nervous, you have no idea. I'm going to end up with no nails, I'm going to be biting them the whole time.'

Things are definitely getting tense as the show approaches the finish line, so Shelton’s training technique of taking his tutees on a chilled out night of karaoke might pay off in the long run. As contestants go head-to-head, so do the judges.