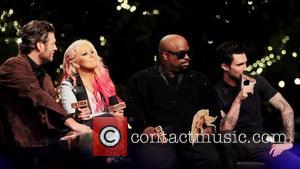 It’s been drawing solid ratings but The Voice has largely slipped under the radar news-wise this year; nevertheless, the show drew to a close on NBC last night (December 18, 2012) with Blake Shelton’s protégé Cassadee Pope taking the prize.

Pope won the show over Scottish-native Terry McDermott and the bearded wonder Nicholas David, reports CBS, with a two hour marathon finale deciding who would walk off as the winner. Pope was stunned to win, dissolving into tears and getting out a hasty list of thank yous: "I'm feeling amazing, thank you for everyone who voted for me and all the fans and Blake, the producers, wardrobe, Carson, the band, and Christina, everybody” she gushed.

Pope got to perform with one of her idols in Avril Lavigne, and the Canadian was one of several stars who made a turn at the show’s prestigious finale. Rihanna, Bruno Mars, The Killers, Smokey Robinson and Peter Frampton were among the others who made an appearance during the two hours. Though Pope is the winner of this series, she won’t have long to relish her crown, with the fourth season of the show beginning as soon as March 25, 2013; it’ll be all change on the voice coach panel too, with Usher and Shakira replacing Christina Aguilera and Cee-Lo Green.