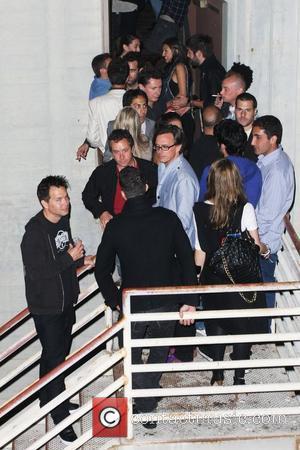 Reformed punk-pop group Blink-182 launched their sold-out comeback tour on Thursday (23Jul09) with their first official concert since announcing their reunion earlier this year (09).
The trio descended on Las Vegas' Hard Rock Hotel & Casino to kick off their 50-date "comeback tour" with an hour-long gig, which was watched by Fall Out Boy rocker Pete Wentz and his wife, Ashlee Simpson-Wentz.
And the band was keen to clarify they weren't launching a "reunion" but instead continuing where they left off four years ago, when they took a hiatus which became a contentious split.
Hoppus told reporters backstage, "This isn't a reunion tour. That has the stigma of a band that's riding on its own coattails... This is a continuation for us. We want to make an album, do what we love and continue where we left off."
Blink-182 are scheduled to play in Las Vegas once more on Friday (24Jul09) before hitting the road as the headlining act on a tour with Weezer, All American Rejects and Fall Out Boy.