English Rockers Blitz Kids Have Split After Nine Years Together. 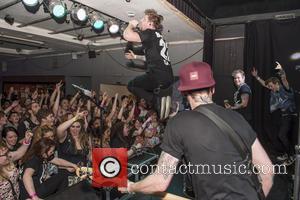 Picture: Blitz Kids, Joe James, Jono Yates and Nic Montgomery - Blitz Kids celebrate the release of their single 'Keep Swinging' with a performance at the...

The group has cancelled all upcoming tour dates and will play a few farewell shows in October (15).

A statement from the band to Music-News.com reads: "There's no such thing as a fairytale. And we're deeply sorry to announce this. But Blitz Kids are no more. We have always said that we are friends, first and foremost, before a band. And it is as friends that we have reached this decision to end this incredible adventure that we started eight years ago...

"We've worked with some amazingly passionate and extremely tolerant people during our time as a band. They showed faith in us when we doubted ourselves, and gave us a chance when we perhaps didn't deserve one. We are eternally indebted to every single one of you.

"But none of what we have achieved together would have been possible without you, the fans... You have taken us on the journey of a lifetime, and we will always love you. We will be playing some farewell shows that will be announced soon. We hope to see you there to celebrate what have surely been the best years of our lives..."