We have had The King of Pop, The Boss and Peter Pan of Pop, but for this guy we shall give him the nick name "The Activist" Mr. Geldof is probably better known now for his political views and campaigns than his music. He was part of The Boomtown Rats knocking out records such as 'Rat Trap' and the legendary 'I Don't Like Mondays' so maybe he does know a bit about Popular Songs That Will Sell? 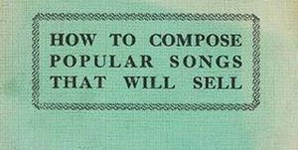 The question is 'How To Compose Popular Songs That Will Sell' just a self indulgent project by Geldof or is this going to be packed full of hit after hit after hit like the title promises? The front cover maybe says that this is full of self indulgence with it being signed b geldof (58 Â½) however let us not judge this too soon.

However on listening, 'How To Compose Popular Songs That Will Sell' has very little in the way of highlights with the the opening track 'How I Roll' being the main standout moment; very much in the same vein as Springsteen, the track contains some real emotion. From this point on there's too much 'filler'. Track number three 'She's A Lover' is a good song but it has the same feel as 'How I Roll' which overall shows lack of originality.

The real down fall is from 'Mary Says' this song will either send you to sleep or will be used by Paul McKenna to help him hypnotize willing souls. All that put aside there is not a song on here that you could hand on heart say gives Geldof a mark that he's returned to form.

All in all this entire album is really not the best and maybe it is time for Bob to either scrub the word musician from his CV or at least amend it to with "former" preceding that all important word. Maybe Mr Geldof should retire gracefully before it's too late.