Peaches Geldof's older sister Fif is set to tie the knot with her beau Andrew Robertson after he recently popped the question with a diamond ring. 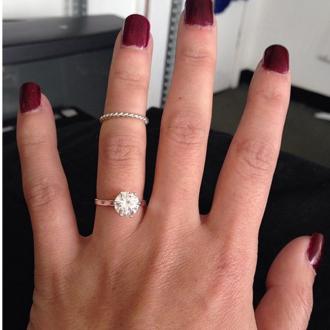 The late star's older sibling, 31, who has largely lived her life out of the spotlight, is set to walk down the aisle after her boyfriend Andrew Robertson, 33, popped the question.

Fifi announced her engagement on her Instagram account over the weekend by posting a picture of a gorgeous diamond sparkler on her ring finger.

She accompanied the snap with the caption: ''Boydonegood (sic)''.

It is not yet known when the happy couple will tie the knot, but it is believed their wedding will take place next year, as the family are still grieving following the sudden death of Peaches, 25, last month.

A source told the Daily Mail newspaper: ''They're going to hold the wedding in July next year. I think we all need a happy family event now.''

However, Fifi isn't the only one planning to get hitched as her father Sir Bob Geldof recently proposed to his long-term girlfriend Jeanne Marine after 18 years together.

Bob, 62, began dating 49-year-old Jeanne after meeting at a dinner party in Paris, where he had fled to after his divorce from Paula Yates - the mother of his children Fifi, Peaches, and Pixie, 23 - in 1996.

Paula died of a heroin overdose four years later, and the 'I Don't Like Mondays' hitmaker took on the care of her and the late Michael Hutchence's daughter Tiger, now 17.

Meanwhile, toxicology tests revealed last week Peaches, who was found dead on April 7, was ''likely'' to have died from heroin after the drug was found in her body.