Bobbi Kristina Brown has written an open letter in which she says she is ''very proud'' of Whitney Houston's final work on 'Sparkle'. 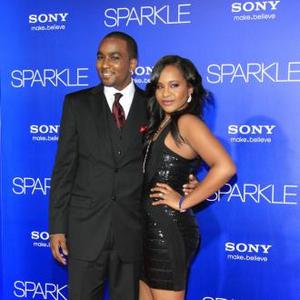 The 19-year-old Offspring of the late superstar and Bobby Brown is thrilled by new movie 'Sparkle', which the 'I Will Always Love You' singer worked on shortly before she died in February this year, and penned an open letter to her mother to praise her performance in the film.

Bobbi Kristina - who attended the Los Angeles premiere of the movie with 'adopted brother' and boyfriend Nick Gordon last night (16.08.12) - wrote in Ebony magazine: ''Mom, I know that making the movie 'Sparkle' meant everything to you.

''I'm so proud that you were able to finish making 'Sparkle' before things happened. You did it for us. Mom, you had such a great time making the movie. You glowed throughout...you just glowed.

''My mother being so happy was an absolutely Beautiful Thing for me to watch. I'm very proud of you.''

Pat - who was accompanied by Whitney's mother Cissy Houston - said: ''I can assure you that Whitney is here celebrating right now. She would have been so humbled [knowing her family was in the audience.]

Whitney's on/off boyfriend Ray J was also at the premiere and said he was ''touched'' and ''emotional'' to celebrate the film.

He added: ''I can't even start with one thing [I wish people would remember about her]. It's just so much.''