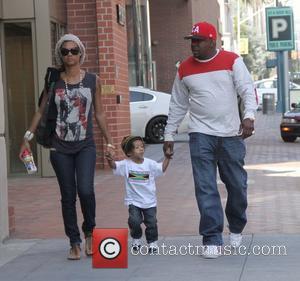 Bobby Brown has left his reunion tour with New Edition to fly to Los Angeles and comfort his distraught daughter Bobbi Kristina, who was hospitalized on Sunday (February 12, 2012), following the death of her mother Whitney Houston, reports ABC News,
Bobbi Kristina, 18, was the only child of Houston and Brown, and she was taken to hospital after suffering from anxiety after being told her mother had died. She had been staying at the Beverly Hilton Hotel with Whitney, though her mother was found dead in the bathtub of her room on Saturday. In a statement to Extra, Bobby Brown said, "Obviously, the death of her mother is affecting her, however, we will get through this tragedy as a family.Again, I ask for privacy during this time". Bobbi Kristina was taken to the Cedars-Sinai hospital from the Beverly Hilton at around 10.26am local time. According to Tmz.com, she was "hysterical, exhausted and inconsolable", with family members now fearing she is suicidal. A family source told Abc she was being treated for "stress and anxiety". At the time of Whitney's death, Bobby was on tour with his original R&B group New Edition. He initially took to the stage in Mississippi after hearing of the death, but was reportedly having "crying fits" throughout the performance.
New Edition released a statement on Saturday, which read, "We are absolutely shocked and saddened by the sudden and untimely death of our dear sister Whitney. As a group, we are extremely close; when one of us hurts, we all hurt". During his performance, Brown had pointed to the sky and said, "I love you, Whitney".