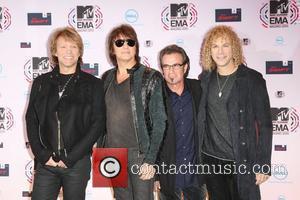 Bon Jovi have announced plans to take a long break from the music industry once the band wrap up their current world tour. 48-year-old front-man Jon Bon Jovi reveals that his age, amongst other factors, has resulted in him reassessing the band's plans for 2011.
Health has been an issue for the singer as of late, and he played shows earlier in the year with a torn calf muscle. Bon Jovi said, "It's time. We have to go to bed." The band have been on tour for much of the last few years promoting their 2009 record 'Circle', as well as their newly released 'Greatest Hits' album, however, the New Jersey rocker admits that being on the road is beginning to take its toll, saying, "When you're going to places that they don't have their own electricity and you say, 'Don't worry, we'll bring our own,' it's time to take a break". However, the singer insists he has no plans to permanently call it a day, adding, "For an old man who has no plastic surgery, still has all his own hair and wears a 30-inch waist, I'm doing OK".
The band are currently playing shows in Japan, and recently announced another long run of shows in Canada and the US for 2011.