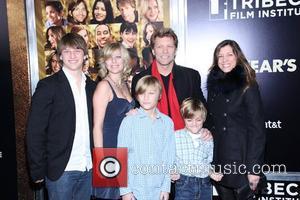 A bitter Pennsylvania rocker has become the target of angry Bon Jovi fans after confessing he sparked a hoax suggesting Jon Bon Jovi had died just before Christmas.
Jeffrey Goho has owned up to penning a fake press release stating the You Give Love a Bad Name singer had died after falling into a coma in a New Jersey hotel on 19 December (11) - and posting it online.
Bon Jovi's representatives were quick to dismiss the hoax but not before the news reached worried fans.
Now Goho confesses to the Asbury Park Press, "I'm in a band as well, and I was going into the recording studio, and we had talked about how the music industry just started taking a turn into crazy new worlds that no one, really, can assess. Long story short, I was talking to my band members on their down time, and we got so worked up in the conversation, I just kind of took the liberty and started (the rumour), because I was so irritated."
But the little-known rocker admits his post has had serious consequences: "I'm not proud of it. I'm getting a lot of backlash from it, but as stupid as it sounds, that's how it started. I just had a blurb and went with it."
And he has urged angry rock fans to stop sending "hate mail" to his bandmates in Philadelphia-area group Minutia, insisting, "They are in no way involved."