Bono And Baez Turn Out For Jobs Memorial 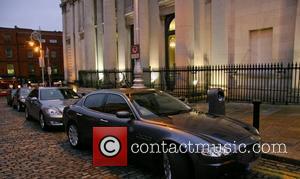 Picture: Bono of U2 signs autographs and poses for photos with fans at Dublin castle. Bono's car was also parked in a no parking zone. (pictured)...

U2 frontman Bono and folk legend Joan Baez were among those who paid tribute to late Apple Inc. co-founder Steve Jobs at a memorial on Sunday (16Oct11).
Jobs, the brains behind the iPhone, iPod and iPad, passed away earlier this month (Oct11) after a long struggle with pancreatic cancer.
Hundreds of mourners gathered at Stanford University's Memorial Church in California for a service held in his memory over the weekend (15-16Oct11).
Rocker Bono and singer-songwriter Baez, who once dated Jobs, were in attendance, as was British actor Stephen Fry, who took to his Twitter.com page to share his thoughts on the event.
In a series of posts, Fry writes, "The weather here in the Bay Area is gorgeous. A sad event that I am attending, but as much a celebration of a great life as a mourning.
"I don't know that there was ever a more beautiful memorial service. Everyone who spoke did so with such passion and love and simplicity."
Computer entrepreneur Bill Gates and former U.S. President Bill Clinton also showed up to pay their respects, according to the New York Times.