Either an aspiring Cheeta (Special friend to Tarzan), or Johnny Morris wannabe, Simon Green, a.k.a. Bonobo, still has a fixation a la Doolittle, not Eliza but Dr. (I wonder if he toyed with calling his alter ego Bubbles? Hopefully not) Putting his monkey man credentials aside for the moment, 'Black Sands' marks album number 4 for the gifted DJ, Producer and Multi-instrumentalist. Its 2006 predecessor, 'Days To Come', stands as a high point in the Bonobo catalogue. It was voted 'Album Of The Year' by listeners of Gilles Peterson. It also delivered its creator unwittingly into the worlds living rooms via video game soundtracks, successful U.S TV exports 'House', 'C.S.I' and 'Californication' as well as TV advertising. You may have heard more of Si Greens work than you realise.

Black Sands is unlikely to not to replicate that success. The sweeping orchestrated movements, subtle melodies and filmic quality can all be applied in differing measures to suit a musical curators whim. Much of the music is light enough to sit behind a subject, but has a character that can be justified in isolation. The largely instrumental pieces are polished panoramas of luscious aural landscapes. Each has a signature, a beat and a hook, and also a clever idiosyncrasy that intrigues and delights. 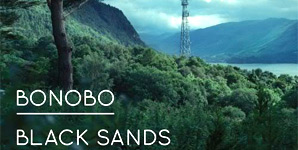 The prelude that leads us off could feasibly be a Bonobo reworking of the opening credits to the cult Japanese martial arts show 'Monkey'. The oriental strings mix with reversed synth notes as 'Prelude' gives way for 'Kiara'. The hollow handclap beats sit superbly with the organ shifting, seismic depth charge of the bass notes. 'Kong' then brings in a summer scented, almost jazzy, gently swaying breeze of a tune accented with a peppering of pan pipes. 'Eyesdown', a recent free download, ushers in a more subdued Drum n' Bass style reminiscent of Nitin Sawhney or Talvin Singh. The laid back lounge lizard cool and smouldering vocal of Andreya Triana neatly complimenting each other. 'We Could Forever' is Haircut 100 holed up at the Club Tropicana pouring out some infectious Balearic beats. '1009' sees Bonobo conjure a tune out of what could easily pass as a phone on repeatedly failing automatic dial out. The distant dubbed vocal treatment contrasts with the repetitive rhythms and smooth strings to create a sumptuous sound.

Elsewhere on the album Mr Green pursues his musical exploration using Mandolin, Piano, Harp and Harmonium among others. String arrangements are softly wrapped over soulful vocals. Electro touches sit comfortably beside sax, flute and clarinets. Andreya Triana's introduction adds more texture to the already superbly layered creation and the subtle interweaving of all the elements is what lifts the album above the norm.

With Black Sands Bonobo has more than cemented his growing reputation for producing sophisticated, intelligent, lavish and luxuriant sonic vistas. The production is delicate. The arrangements and compositions are both stunning and sensitive in equal measure leaving you with an overwhelming pleasurable experience. His only worry....................that it goes the same way as a certain Moby album and gets licensed to everything until you're bored of hearing it!