No giggling now! A gigantic blue cockerel sculpture has been revealed as the new artwork for Trafalgar Square's fourth plinth. 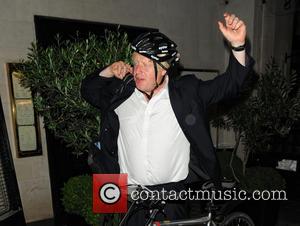 Symbolising regeneration and strength (somehow), the 5 metre tall, bright blue sculpture was unveiled to be on display for 18 months, taking over from the 4 metre bronze sculpture of a boy on a rocking horse that had stood on the famous square's plinth since February 2012.

As usual, Boris Johnson was on hand to crack some jokes, with the mayor of London vowing to try to avoid any double entendres when talking about the sculpture: "It is a ginormous blue Hahn Cock, as it's called," he informed BBC London. He also joked about Prime Minister David Cameron's efforts to block internet pornography: "I think if you tried to Google it in the future, the Prime Minister would stop you from finding it."

Listen To The Artist Katharina Fritsch Talking About Her Work:

However, certain groups have been concerned about the choice of artwork with one member of the Thorney Island Society going so far as to describe it as "totally inappropriate." Why? Because Trafalgar Square exists to commemorate the 1805 Battle of Trafalgar, a Napoleonic naval victory over France and Spain. The conservation group wrote the Westminster Council to protest the cockerel - a traditional emblem of France - being displayed. However, the fourth plinth installation - an art platform that is bidded for by renowned artists - went ahead with Fritsch's work, with programme director Justine Simons explaining "We really love the striking vivid blue colour and also the character is really interesting. It's an everyday kind of object - this regular domestic cockerel with a twist."

My, my - what in the world could this intriguing "twist" be? Simons earnestly adds: "The artist has supersized it."