Multi-instrumentalist Boxes releases 'Red Skies' as the follow up single to their debut EP Silent Alarm; released on Monday 30th April 2012 through Bow Records, the track will feature on the indie/dance/pop (generally difficult to label) album Stickers (May 7th 2012).

The video expresses the poignant song with strong colours and an overlapping film montage. The heartfelt, symbolic lyrics sung with the gentle but husky vocals of Carey Willetts, better known as Boxes, convey his feelings about giving up which can easily be interpreted as his outlook on his rise to popularity. Described by Planet Notion as something that will make you feel either cheerful or miserable, Boxes' catchy tunes and uniquely pleasant use of metaphors almost guarantee a rise in followers!

Boxes explains that Stickers is an account of all the ups and downs in his life from feeling alone and isolated from his friends (Sharks) to the trauma of his child's birth (I Can't Imagine). According to the artist, it also strongly about the effects of being labelled - an idea that is contradicted by the diverse mix of genres in this album.

The multi-talented Boxes has combined a number of instruments in the making of his upcoming album on Bow Records, including guitars, loop pedals, keyboards, synths and drums, creating an Owl City-like vibe - but on the softer side! 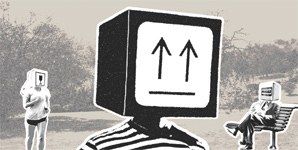