Boy George - This Is What I Do Album Review

Review of This Is What I Do Album by Boy George

Sometimes being part of a successful band can hinder a musician.  There aren't many legendary lead singers who have had solo careers that matched their band's successes.  Sir Paul McCartney, Sir Mick Jagger, Roger Daltrey and Morrissey all had, and still have, great solo careers, however they certainly don't match that of the bands they fronted.  The same can be said for Boy George.  Fronting Culture Club, he was an icon of the '80s and is still very much an icon for millions all over the world, yet like the aforementioned stars, his solo projects have failed to have the same impact. 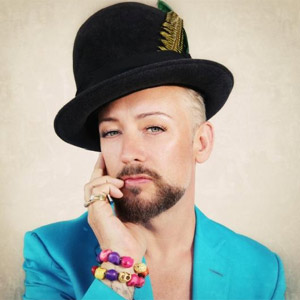 He really needs no introduction, his reputation precedes him.  He's a one-off character and the music world would be a slightly duller place without him. 'This Is What I Do' is his ninth solo offering and, despite all we read about this superstar, we must remember that he is a musician first. One thing to remind us of that and one thing that has never changed is his soulful voice; this is apparent throughout the record.

The most Culture Club-like track on the album is upbeat catchy reggae song 'My Star'. Joined by rapper Unknown MC, it is sure to be the one you'll have on repeat - it's Boy George at his best.  A reggae and ska feel to any Boy George album is, of course, expected; 'Live your Life' and 'Nice and Slow' are exactly that, not to mention 'Play Me' which features MC Spee. This combination works incredibly well; it's smooth, edgy and immediate.  Another featuring artist includes Nizar Al-Issa who features on the album's last track 'Feel the Vibration'.  This is a glorious ending to a fantastic album.

'King of Everything' opens the album and can be described as a soft rock track with engrossing lyrics.  'Death of Samantha' can also be described this way; a deep guitar lead track which really shows off the 52-year-old's voice.  Backing singers can be heard throughout this record but perhaps most powerfully on 'Bigger than War'.  This jazz track uses the choir perfectly to compliment Boy George's voice.

Many genres of music can be heard on this album, with 'It's Easy' having a country music feel to it.  This soft number is a simple track with a beautiful melody.  The album even sports a Christmas vibe in the track 'My God'; an Elton John-esque  pop track with, again, brilliant use of a backing choir.  'Any Road' is soft flowing, meaningful ballad, with gripping lyrics such as, "If you don't know where you're going, any road will take you there".  It's perfectly timed, slotted before five back to back reggae tracks - the calm before the storm!

This is a fabulous album from a man that can only be described as equally fabulous.

Boy George Hits The Road With Culture Club For Summer 2018

Boy George Confirmed To Return To 'The Voice' - In Australia!

Boy George Will Not Be Returning To The Voice UK

'The Voice' Judge Boy George Is 'In Love' With Simon Cowell