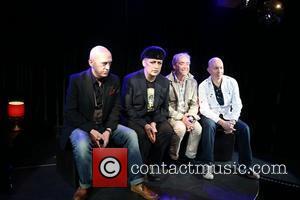 Boy George and Marc Almond took to the stage in London on Saturday night (15Sep12) to mark 35 years since the death of T-Rex frontman Marc Bolan.
The Culture Club frontman performed at the Marc Bolan 35th Memorial Concert at the Shepherd's Bush Empire in the British capital almost 35 years to the day since the singer was killed in a car accident on 16 September, 1977 at the age of 29.
Boy George sang with T-Rex tribute band T Rextasy, while Soft Cell's Almond and veteran pop star Sandie Shaw also performed some of the band's most famous songs.
The evening also included a cameo appearance on stage from T-Rex drummer Bill Legend, the only surviving member of the popular glam rock group.