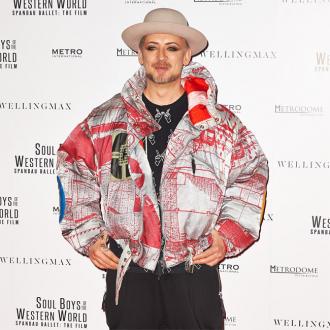 Boy George has been left ''heartbroken'' by Steve Strange's death.

The Culture Club frontman has paid tribute to his friend following his sudden death from a heart attack aged 55 yesterday (12.02.15).

George - who, prior to finding fame, worked in the cloakroom of Steve's infamous Blitz nightclub - tweeted: ''Heartbroken about the death of my friend Steve Strange. So bloody sad. Such a big part of my life!''

Fellow New Romantics Spandau Ballet - who got their big break performing at Blitz - were left ''in tears'' by the news and dedicated their appearance at the Sanremo festival in Italy to the Visage frontman.

Guitarist Gary Kemp tweeted: ''Spandau in tears tonight. We dedicated our performance to Steve Strange. Without him we would never have been here. A maverick to the end.''

His brother and bandmate Martin Kemp added: ''RIPsteve strange goodbye my dear friend. I will miss you! (sic)''

Singer Kim Wilde is another star saddened by the 'Fade to Grey' hitmaker's death and remembered him as a ''family man''.

She said in a statement: ''I'm so grateful that life brought Steve and I together, he was funny, great company and completely bonkers in the most adorable way.

''He would often call up for a long chat, and always asked after my husband Hal, and our children Harry and Rose.

''Steve was a family man first and often spoke of his beloved family in Wales.

''Steve will be remembered as the most elegant and beautiful of the New Romantics at the beginning of the 80s, and 'Fade To Grey' one of the very best and most influential records of the decade.

''I shall remember him for his humour and generous spirit; he really was a very lovely man.''

As well as his music career, Steve will be remembered for being a prominent face on the London club scene in the early 1980s.

Rick Sky, owner of BANG Showbiz, said: ''This is a sad loss. Steve has died much too young. He was one of the king pins of the New Romantic scene and ran some of the best clubs the UK has ever seen. He was a sweet, fun-loving guy and wonderful company.''

A number of other 80s icons have also paid tribute to the late star.

Duran Duran frontman, Simon Le Bon, tweeted: ''I'm very sad to announce that our friend Steve Strange has died in Egypt today. He was the leading edge of New Romantic. God Bless him.''

Steve's band Visage formed in 1979 and became prominent after they released their record 'Fade to Grey' a year later.