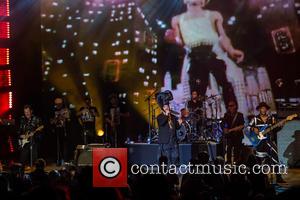 Before the Culture Club star took the stage at the Greek Theater, concertgoers were stunned to see the athlete-turned-reality TV star, formerly known as Bruce Jenner, walk out with a mic in hand.

Jenner, who revealed her transition from male to female earlier this year (15), was welcomed with a standing ovation, and told the crowd, "Caitlyn Jenner in the house for her first Boy George concert! This is going to be a good group. Thank you so much."

She added, "Enough about me. Thank you for being here tonight. This is so much fun for me. Let's hear it here at the Greek Theater for Boy George! Let's get it going!"

Boy George then made his entrance and later lauded the audience for showing so much support to Kim Kardashian's stepfather and her public transition, saying, "I expected a standing ovation for her and I wasn't disappointed. We need to celebrate the kinds of changes that are happening."

George also posted a video of Jenner's stage introduction on his Instagram.com account and captioned it, "Amazing, cosmic, gorgeous to have @Caitlynjenner open our show last night. Thank you for a super special moment!"