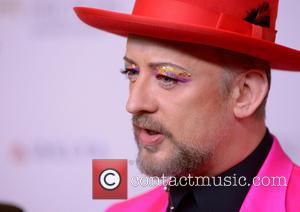 Singer Boy George looks back at the week he spent cleaning up rubbish with New York Department of Sanitation employees with fondness, because they treated him with such kindness and respect.

The Culture Club frontman was sentenced to five days of community service in 2005, following his arrest in Manhattan on suspicion of cocaine possession and falsely reporting a burglary. The drug charge was later dropped and he began his stint with the Big Apple's trash collectors in August, 2006.

But he admits the fact that he did his service with "good grace" won him favour with his colleagues.

Boy George explains, "I wanted to come back to America, so I knew that if I didn't come and do it (community service) I would never be able to come back here... I thought, 'It's a week of hard labour,' and I have to say that the people at the New York Sanitation Department were so fantastic to me.

"I kind of got on really well with everyone there, so I left there actually thinking, 'That was actually a nice week!'

"I talked about doing a gig for them. They said they were gonna pick me up from the New York airport in rubbish trucks and drive me into the city."