Boy George kicked his drug habit when he realised he hadn't seen a tree in three years and got quite ''emotional''. 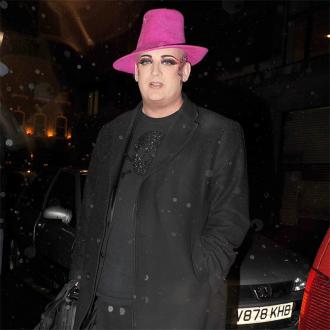 Boy George kicked his drug habit when he realised he hadn't seen a tree in three years.

The 51-year-old singer quit his deadly habits three years ago after an ''emotional'' epiphany when he suddenly discovered he was missing out on life and was out of touch with the world.

He said: ''I woke up one morning and realised I hadn't seen a tree in about three years and got quite emotional. It's like I had a pair of dark glasses on and hadn't seen things properly for a while.

''I don't think I was happy with what I had before. I felt something was missing. When you're sober, you see how other people behave and realise you don't want to be like that.''

The flamboyant star has rubbed shoulders with the likes of George Michael and Madonna and sold more than 50 million albums over the years, but confessed one of his most memorable career landmarks was finally being acknowledged by Tom Cruise on twitter.

He revealed: ''I got a tweet from Tom Cruise last year I said, 'Tweet me. I've been a fan of yours since 'Risky Business'. He didn't respond. Then I said, 'John Travolta blew me a kiss at the Grammys once, you could at least say hello!' He replied, 'We're dialling you in on Pandora [US music site] now.'

''I like Tom Cruise. I don't care that he's a Scientologist - as long as you don't hurt animals or children and you're nice to your mum!''