Boy George has blasted modern pop singers, saying that all the records they make sound the same. 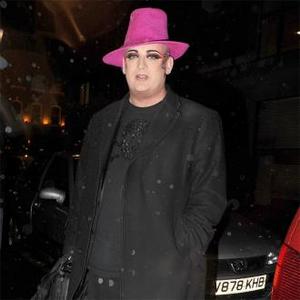 The 'Do You Really Want to Hurt Me' singer thinks today's crop of pop stars are more interested in personal gain than making a difference to the world, and most of their records are boring as a result.

Speaking at The Ivor Novello Awards, he told BANG Showbiz: ''Pop, I think, just goes in waves, and I think technology kind of makes everyone make the same record.

''I think the problem at the moment, and has been for a while, is that everybody wants to make loads of money, because that seems to be the most important thing. They all want the fur coat, nobody wants to change the world - and that's the problem.

''Technology is a great thing because it's opened up The Doors for people, but when you hear things it's just, 'It's the new this, it's the new version of that' and it's just like, 'Yawn.'''

The singer - real name George O'Dowd - also said a new Culture Club album is definitely in the works, which he hopes to unveil soon.

He added: ''It's definitely going to happen. We've been in the studio, we've been writing stuff, we're basically probably going to do it next year. We want to make a new record, we're writing that. We want to start In America and at the moment I'm not allowed in America, so I'm waiting to get my visa.''